We've had several questions about what it's like to be aboard the boat in the snowy, blowy weather currently hitting the pacific northwest. In general, the answer is - not a whole lot different from being in a house - except that when the wind blows, our house bobs around on the water. We have heat. So we're warm and cozy inside. Outside, not so much. The wind has risen to 20-25mph. Snow is still slanting in, hissing over the fiberglass. It sounds ominous. We take the hint and venture outdoors as little as possible. The nice thing about Seattle is that we aren't particularly good with snow because we don't have to be. We can hunker down for a day and wait for it to go away. That's the forecast. 40 degrees and raining by Friday. Yay. Seattle isn't built for this nonsense. Now. On to the photos: 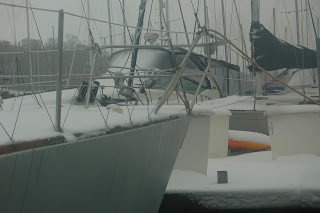 This is the view out the starboard side window. You can see the snow is melting off the boats - all of the boats have some heat inside and little insulation. So our heaters end up melting the snow. We went from solid white windshields this morning to rivulets of snow melt this afternoon. 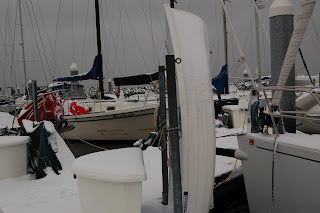 This is out our door. You're looking at my neighbor's dock box and dinghy. Yes. The sky really is that color and it's a solid, unbroken mass of that color with small, stinging pellets of snow driven on the wind. Not much accummulation, really, but it is more than it looks like in this photo.﻿ 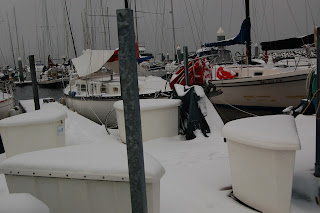 Same shot, wider angle. This photo is crooked because I'm standing on the boat and the wind is bobbing us around on the water. Yeah. The water is indeed the same color as the steel pole in the foreground. ﻿ 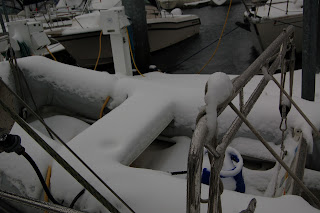 This is our dinghy. Resolution isn't what I'd like, but really. That's 3+" of snow on the seat...at 1' above sea level. I can't say this storm is a nonevent - because there will inevitably be a series of hilarious and painful Youtube videos about people who attempted to drive in this stuff. Hilly terrain and wet, heavy snow = auto insurance nightmare. But really, about the only thing we'll get out of this is a really spectacular flood on Friday, Saturday and Sunday when the rain comes back in to wash it all away. A bunch of the farmers in the flood plains are already bracing.
For us, though, it's a lazy day of tea and comparing notes with the family to see who still has power. By Friday, this will all be a memory. Which is good. I need to go to the grocery store.
Posted by Marcella Burnard at 2:57 PM