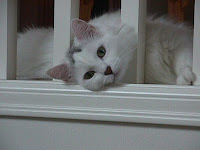 Eight years ago today, Copernicus died. He was eight years old. Sure, he'd been sick, but it had been with something that shouldn't have killed him. He'd developed a urinary blockage, something that can and will kill a male cat if it isn't caught and treated, but we were right on top of it the whole time. I caught it early, had him treated, and when he kept blocking, we opted for surgery. Aspiration pneumonia ultimately took him. 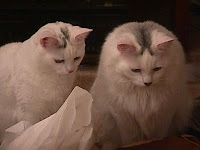 It's tough to explain why this was such a devastating event in our lives. Copernicus and his sister, Erie, were the first cats my husband and I adopted after we were married. He was our number one furry son. (Erie, at 16, is arthritic, stone deaf and very opinionated, but she is still very much with us. She demands belly rubs every single night.)


He adored me. I'd never been adored before. Not quite like that. Loved? Oh, yes. Absolutely and unconditionally, by parents, grandparents and my husband alike. But they never trusted me to stop the rain. They never believed that I had the power to cause earthquakes...well...DH seems to think volcanic eruptions, earthquakes and destruction on a massive scale is my fault, but that's another story involving past lives. No, when blessedly minor earthquakes struck the Puget Sound region, Copernicus would come find me, where ever I was braced, and level an accusing, exasperated glare upon my person. "Mom. Knock it off."  I was his favorite ladder. His favorite pillow and his favorite bed. We suspected, once or twice, that he resented the claim the DH seemed to have on my affections, too. That was a little weird.
Copernicus purred simply because I entered the room. In the evenings, as we would get ready for bed, he'd come pull the towels off the towel rack, giving them a precise, practiced yank that flipped one towel beneath him while the other settled over the top of him. I was expected to lean over the breathing bundle of towels and whisper sweet nothings to him. The bundle of towels would rumble with pleased purring. That same purr lulled me to sleep each night as he snuggled in beside me, his head pillowed on my arm.
For the eight short years I had Copernicus, I walked on water. We had rough days, days where we hurt one another's feelings. But it didn't ever seem to dent his esteem for me. Maybe it goes without saying that I thought he was the handsomest, sweetest, bravest, and cleverest of felines. He seemed to think he was, too, until he started feeling so poorly. After his passing, other cats entered our lives and our home. They, too, are sweet, beautiful, brave, clever, loved and spoiled. But Copernicus was our number one feline son.
So after years of planning, saving and scrimping to buy our dream boat, when we finally signed the papers on a catamaran of our own, there wasn't much discussion about what it should be named. After I told DH in no uncertain terms that we would NOT be naming the boat Nostromo after the ship from the movie Alien...

Posted by Marcella Burnard at 8:47 AM 7 comments:

Faye (who might could have been an axe murderer, herself) read my post entitled "The Internet is Full of Axe Murderers" and pointed out that I'd never quite explained the whole axe murderer thing. Any new technology brings with it a pre-existing set of baggage - like cell phones and brain cancer. You know that one, right? Use youre cell phone too much and it'll microwave your brain, giving you cancer. (Research has found no such link, but studies are ongoing and the story changes every other week. So use your cell phone at your own risk.) When the internet was bright, shiny, and new, it inspired fear. The most obvious fear was over 'meeting people you couldn't see'.

You'd get to chatting with someone on the internet - via email, IM or some other old-fashioned mode of communication. The person is nice. You suggest getting together in person for coffee. Your family is horrified. "Make sure you meet in a public place! I mean, you never know! This person could be an axe murderer!" No. I have no clue why someone would believe that people on the internet were supposed to be more predisposed to violent crime than, say, that creepy guy who lives at the end of your block. Obviously, what with the Craigslist murders and whatnot, there are complete nutjobs out there in the world determined to do damage anywhere, anyway possible. But that was true long before the internet came along. So.

The amusing aside is this. I'm a member of an international cat fancier's loop called Feline-L. The people on the list are some of the most helpful, friendly and caring people you'd ever care to know. Most of us have never met in person. So, one year, a group of Feliners decided to have a Gather. A location was found, hotel secured, and Feliners from all over the US and Canada descended. We emailed all sorts of jokes about axe murderers met over the internet.

The Gathering went off beautifully. People met, mingled, chatted, and ate Kitty Litter Cake. http://allrecipes.com/Recipe/Kitty-Litter-Cake/Detail.aspx. For those of us who couldn't make the actual physical event, the participants set a time and sent a URL for a webcam. They'd group up and wave to those of us watching.  At the appointed time, many of us sat at our computers, glued to the screen as people we hadn't yet met began assembling in front of the camera. Finally, there they all were. And was that . . ? Yes, indeed. It was. An axe. One of the women had brought it, because, as she said, "No Gathering of Internet Axe Murderers would have been complete without the axe".  Okay. The story loses something in the telling. It was funny. You'll just have to trust me. Because of course I'm on the internet and you can believe everything you read here.
Posted by Marcella Burnard at 8:59 AM 2 comments: