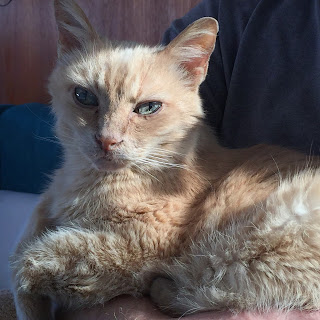 I have a confession. Last night I failed as a parent and as an adult. Now I get why my mother TO THIS DAY tells the story of walking the entirety of JFK International Airport trying to find her 8 year old (me) a hotdog and failing. My father had been stationed in Iceland. He'd been there for months while we lived with my mother's parents waiting for Dad to find housing for all of us. When finally he did, my sister and I were taken out of school, removed from our doting grandparents (very likely to my mother's everlasting relief), our beloved felines abandoned - one pregnant - and here we were. About to leave the United States in the middle of winter, bound for the great unknown. We had to get dinner before getting on the plane. I was offered a steak. I wanted a hotdog. Pizza? HOTDOG.

My poor mom. Faced with little kids desperate for some sense of familiarity and comfort and she couldn't make it happen.

This morning I have complete empathy for that twenty-something woman trying to parent an 8 and a 6 year old. This morning, I am also more grateful than ever that I never had children of my own.

At midnight, about an hour and a half after I'd finally gotten to sleep, Autolycus woke me by pulling my hair. Okay. To be fair, he was kneading, but he knew exactly what he was doing. "Mom," he purred, while drooling lovingly into my face, "I'm hungry." I was annoyed, but I got up and made him something to eat.

I was more annoyed, but I took it away and offered kibble.

Angry at that point, I put the kibble away and climbed back into bed. I must have misunderstood. But the second I put my head on the pillow, there he was. Yanking my hair and, now, licking my face. I got really mad. "WHAT?? What do you want?"

The boy recoiled and slowly, sadly turned his back and curled up. A little orange ball of misery that clearly said I'd stomped on his tiny, tender feelings, you big meanie.

Still grumbling, I got up again and got him water. Maybe that was his issue. I put the dish before him. He turned his face away. His ears drooped. I could almost see his little shoulders shaking in grief.

Oh my gawd. M A S S I V E  G U I L T. Who's supposed to be the adult here? Who's supposed to remember that the boy is aged and ill and that I'm lucky to get to be awakened by him at all? That's right. Me. The cat parent who is failing as a parent on an epic scale. Brilliant. Cue the abject apologies.

He did not want to hear them. Also did not want to be touched. Okay. I deserved that. No problem. Let's try a few more food options, shall we? Let's start with the current favorite - a can of Tiki Cat Lamb and Beef Liver. (Barf.)  As I got yet another plate and dumped grotesque globules of goo thereupon, the DH, awakened by all the drama, rolled out of bed to attend to business. I set the plate of food before the cat.

He ate. No histrionics. No accusation. Just a plain, simple, intimation that I'd been 100% unreasonable about being awakened at midnight so I could dirty four plates, and three of them for nothing.

As the DH and I stood beside the bed waiting for the cat to finish eating (what? You thought he'd get up??) I sighed.

What I said then, I say again this morning: I hope to all the gods that I am the only person on the planet so fatally attracted to creatures that seem bent on exposing my every flaw as a human being.
Posted by Marcella Burnard at 10:08 AM 1 comment:

Shortly after midnight, last night, Autolycus woke me from a sound sleep to indicate that he was hungry and would I please provide him with a midnight snack. This by way of kneading my hair with intent to harm. I rolled out of bed and got the boy a plate of food, which, of course, I had to take *back* to the bed because, what? You expected him to get up?? He tucked in.

I took the opportunity to check on the girls. Cuillean snoozing in her heated bed atop the fridge. Check. Hatshepsut - uh oh - Hatshepsut is stationed at the door to the cockpit. Standing at attention. Her gaze riveted in that clear "Mom, something's out there" gaze I'm finally coming to recognize.

I grab the flashlight. Oh, look. The canvas door has been pulled open. The 2 gallon water jug I put in front of that door (to keep Hatshepsut from letting herself out) has been shoved to one side. Great. We had a visit from the local masked bandit. Except. The compost bag is still inside. Huh. He must not have gotten in past the water jug. Flick off the light and start to turn away.

Hatshepsut does not abandon her post. In fact, she repositions. It isn't quite a shout of 'you idiot, it's still out there' but it's close. So I scan the cockpit. Looks clear. And I open the door. That's when I hear it - this odd, metallic scraping sound. Thinking I'm walking into an enclosed space that contains a raccoon, I hesitate, my heart going from 'wish I were asleep' to 'oh shit' in a flash. But no. The noise is coming from outside the boat. I flip on the overhead light with the intent of scaring away anything or anyone lingering outside my boat. Doesn't work. Just blinds me. Flip the light back off, suck up my courage and unzip the door to outside.

There's the raccoon. On the finger pier, just aft of my boat, staring at me over the corpse of a brand new 2lb bag of cat kibble. 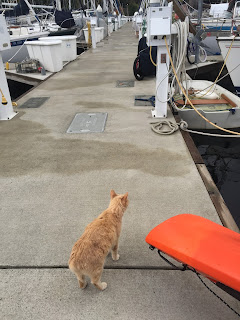 No longer merely human, I hiss at the little bastard and climb out onto the transom. He grabs that bag of kibble in his teeth and bolts. I pursue, still hissing. It's raining. It's almost 1AM. I am dressed in a tee shirt and a pair of fuzzy slippers. But I chase that damned raccoon up the dock for several yards - to that light post Autolycus is looking at in this photo - until the raccoon decides discretion is the better part of supper.

He drops the bag of kibble and makes his break.

I only wanted the kibble. That's Autolycus's favorite. Stuff is $12 a 2lb bag. That raccoon can just pay for his own damned bag of noms.

I only hope none of my neighbors were up at that hour of the night. . .
Posted by Marcella Burnard at 9:30 AM 2 comments:

Had a dream last night. I'll spare you the details. Suffice it to say there were two kittens. One plump and happy and outgoing. The other was smaller and shy. The two were sisters from the same litter (and thus, ostensibly, ought to have been the same size.) Insert all the random weirdness that is dreaming here. Until. Somewhere in all of that nonsense, I realized I hadn't seen shy kitten in a very long time. She hadn't come out to eat or anything. Uh oh. Cue the dramatic and heart-wrenching John Williams score. I HAD TO FIND HER. And I was scared to find her all at the same time for fear that I'd come across only her dry, shriveled up corpse. I did find her, curled up in a clothes drawer (even my subconscious gets cats) with her sister. She was tiny. Pitifully thin and wasted. But not dead. The dream ended with all of the emergency measures and plans to nurse her back to health.

Why tell you this? Because that kitten is writing.

I haven't written a single sentence on any story since the middle of November. (The kitten I haven't seen in a long time.) Sure, there are excuses and moderately good reasons for it. But the fact remains, I've been looking for that particular kitten for the past two weeks and with this dream, it's clear I'm holding a limp body in my hands - a body that's just about ready to give up unless I initiate some drastic intervention.

For the curious, the fat, outgoing kitten is day to day life - the things that suck up all of your attention when given the chance.

Funny. I know what to try for a sick kitten. Droppers of water and kitten formula. Warmth. Physical contact close to the heart (kittens cue off of mom's heart beat, so tucking a sick kitten against your skin close to your heart helps.) I don't know what to do for sick writing. Except maybe to approach it gently with the intention of dribbling in a few words at a time many times a day. I'm told it's a sign of a healthy mind if you begin taking positive action to solve problems in your dreams. Don't recall where I saw that, but I'll take it. And trust that it will spill over to actually solving the not writing problem. I hope.
Posted by Marcella Burnard at 11:10 AM 3 comments: