In Pursuit of Warm, Sunny Adventure 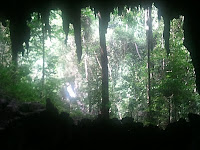 We returned from a week cruising the western Caribbean. It's apparently been a messed up cruising year what with one cold front after another slamming through the region. When we arrived in Tampa, the storm front that had brought snow to Atlanta had just moved past. Tampa was chilly. But we got lucky. Our first port of call was Key West. It was deliciously warm and humid. DH and I walked around a bit, found the Civil War era fort, toured that and then walked back to a bar set up on a dock over the water. Directly across from us, anchored between a couple of mangrove thickets was an early version of our boat - a Gemini 3200. With more time in Key West, we might have been able to connect with our fellow Gemini owner, but the cruise ship waits for no one. So we boarded just as a major rain squall rolled in and unloaded. We spent a glorious day at sea in bright sunshine and warm temperatures. Belize was next. We cruised into Belize City and went on a tour of a cavern system that the Maya had once used as a sacrificial site. The photo above left is the ceremonial entrance of the cave. It's called the Dragon's Mouth. Forgive the lack of focus and definition - cell phone photo. Because of the tight passages in the cave, the guides weren't keen on letting me take the good camera in to be smashed against the stone. The cavern system is active. It is still forming. It is also still an active archeological dig. We were allowed only in the top two tiers of the cave where agricultural sacrifices were performed - petitions for a fruitful harvest and such. These rites did include blood as needed, but required little more than a few drops from the petitioners. In the deeper levels of the caves, human sacrifices were made. One of the reasons we weren't allowed into those areas. I was fine with that. I had no wish to descend that far into the Mayan Underwold, much less walk the same path a sacrificial victim had once walked. No, thank you. My one regret: I couldn't get a photo of the bats clinging to the roof of the cave. They were cute (fruit and insect bats, not vampire bats - which Belize has.)

Then we were on to Honduras. We had a gorgeous full moon that night and one of those sunrises that takes your breath away. I'd gotten up early to watch the moon set and the sun rise. As a result, I was witness to the fact that no matter how experienced the captain, docking is just a pain in the butt. We were aboard the Holland America ship Ryndam. It's one of the smaller vessels in the fleet. Still, the channel into the the docks in Roatan was only slightly wider than the ship itself. And the captain had to back in. All was going well. He had the boat lined up with the middle of the channel. The moon set. The sun rose. A 20 knot wind roared up out of no where. We were broadside to it. In an instant, that great big hunk of steel was up against the channel markers with no hope of manuvering off. The only option was to gun it, get out of harm's way and realign for another run at the channel. (Just to make sure there was no pressure or anything, there are two rusting wrecks on the reefs.) DH and I felt immeasurably better about our adventures in docking our little 34' cat. . .and believe me, we've had a few. There are sections of the air out at the marina that still glow bright blue from the swearing we've done. The captain lined the boat up with the red channel markers (red right, returning) and waited for the wind to shove the ship just past the point that the boat would hit the marker and he poured on the power. It did the trick. He got the ship into the channel and into the lee of the island where he could then dock without having to fight the wind as much. Honduras was beautiful. Hills and mountains covered in lush, vibrant foliage. We parked our backsides on the beach and I swam in the 80 degree water. We managed to fry DH's upper torso to searing red. Oops.

Mexico was next. We landed in Costa Maya on the Yucatan Peninsula. I knew the Yucatan was covered in jungle. I remembered that much from fifth grade geography, but I had it in my head that jungle = mountainous. I couldn't have been more wrong. The Yucatan Peninsula was flat and only barely above sea level. The entire thing is geologically recently uplifted sea floor. The soils are young and thin. The whole of the region is riddled with sink holes and caves because of the porous limestone being hollowed out by running water. From the coast, the Yucatan looked barren and parched. Once we docked and went inland a little, the foliage thickened and grew taller and more in keeping with my Hollywood-inspired notion of 'jungle'. But the land was still flat as a pancake. Then we looked up at the tops of the trees and there was Mayan temple. No wonder so many of the Mayan cities were lost. You could walk right up to them and unless you tripped over the stairs, you'd never know they were there. We visited Chacchoben, a nice sight because it's smaller and not quite as crowded as some of the better known ruins. The complex has not yet been fully excavated or catalogued. Apparently, satellite imaging has given archeologists the locations of thousands of sites throughout Mexico, Belize, Guatemala and Honduras. With so many investigations to be done and so few resources to go around, Chacchoben has been left only partially excavated and reconstructed. At this site, we hiked through 'hills' covered with dirt, trees and oddly shaped limestone rocks - the remains of another structure - one that has yet to be investigated. I loved walking through the banyan and palms, while a toucan (a real one!) made a fuss overhead, knowing that entire new chapters of history waited to be dug out of the dust.
It was our final hurrah. We turned around and headed back after that. Tampa was 47 degrees when we arrived. No one was happy with that. 85 and humid in the Yucatan one day, 47 freaking degrees the next. My grumbling alone should have super heated the atmosphere.  I leave you with this last photo. Me. Kitted up for caving. Hey. No one ever claimed safety was pretty. 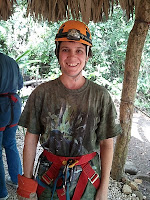 The Internet is Full of Ax Murderers 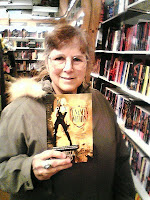 This is fantasy and science fiction author Noel-Anne Brennan. We're friends, even though we've not yet actually met in person - have I mentioned that I love the internet? She's coached me through all of the rejections and writing frustrations the calling is heir to. Because she's been so generous in sharing advice and experience, she was one of the first people I called when my first book sold. Into the bargain, she's a cat person, and she makes and sells her own jewelry.  (http://tigermoongems.com/)  So how cool is it that in the midst of some of the worst snow of the winter, Noel-Anne found my book in a local bookstore and took the time to grab a cellphone photo?? Find Noel-Anne's books here: http://www.amazon.com/s/ref=nb_sb_ss_i_0_17?url=search-alias%3Daps&field-keywords=noel-anne+brennan&sprefix=noel-anne+brennan 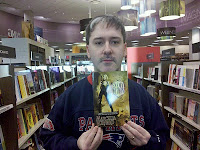 This is my dear friend Louie. At the risk of exposing myself and Louie as terminal geeks, we're gaming guildies. Currently, it's World of Warcraft, but our association as slayers of evil, online bad guys goes all the way back to Ascheron's Call. I refuse to post any info about that game which might expose the year it was released. I can say I had the great pleasure of meeting Louie in real life (irl for my fellow gamers) when he flew out to visit the Seattle area. Now my fellow guildies and I are lobbying for him to visit again, but this time with his lovely wife and daughter. We're hoping to entice them into moving to this side of the country. We're selfish that way. He wore my book tee shirt to work under his police uniform. Can you blame any of us who know and love our epic hunter, Zar, for attempting to lure him and his family closer? 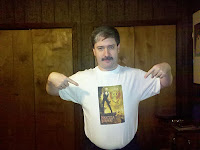 Harbinger of a Good Day

This is Cuillean, a shy and delicate girl, suffering, as many of us do, from an excess of weight. (We're working on that.) She's my cat, as opposed to hubby's. And she's skittish. In fact, to this day, when DH walks in or makes a sudden move, she runs. This in no way should reflect on the gentle, caring person he is - the DH adores his felines, too. It came as some surprise, then, when a few years ago as DH was packing his gym bag, as he does every morning in an effort to manage his health, Cuillean climbed atop his gym bag and settled down. He turned around to put his work shirt into the bag and stopped. He blinked. "Cuillean," he said. "That's my bag." She murped and jumped down.

You can see this coming, can't you? She did it again the next morning. Only, she declined to get off the bag when spoken to. DH did the only thing he could do. "I'll just have to pet that cat on my bag," he said. Cuillean had successfully conditioned the human. Thus began the ritual of 'Morning Pets'. It no longer involves the gym bag. Now the alarm goes off, DH shuts off the alarm, rolls to his back and turns the covers down. I roll to my side facing him. He pats the mattress five times.
Posted by Marcella Burnard at 9:16 AM 4 comments: