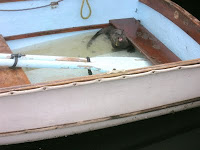 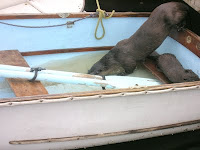 This little guy and his mum are river otters we spotted playing in a dinghy in Snug Cove. They aren't the otters in the tale I'm about to tell, but they were characters in their own right. They didn't give a hoot that I was standing two feet away clicking photos as fast as the camera would take them. They were engaged in their own business and I didn't figure in to their antics. Except as a focus for the little one's hamming for the camera.
The Great Otter Attack, however, occurred in the Gulf Islands. Degnen Bay. It began with petroglyphs. We'd read in a guide book that the approach to Degnen Bay had a spectacular, if hard to find, petroglyph marking the entrance to the bay. The island itself had several stellar examples of ancient petroglyphs. We thought that sounded pretty cool, so off we went to anchor in the little bay. The spot is popular with people who live on the island, so the bay is full of boats on mooring buoys. We found a spot in shallow water where we could safely put down an anchor and pull up our dagger boards. After a pleasant evening and a try out of the new barbeque, we closed up the boat and headed to bed.
Fast forward to o'dark sometime of the night. DH and I are sound asleep, when suddenly, three hearing cats (the fourth is stone deaf - she misses alot) materialized in the master cabin, jumping up and down on me in a panic. I awoke. The boat was rocking back and forth as if a power boat had come through at speed. Except I didn't hear a boat. THUMP. Something hit the hull and the rocking intensified. My heart answered that thump by knocking against my ribs. I figured the tide had gone out farther than we'd thought it would and we were banging against rocks. I spill out of bed and peer out the windows.
Plenty of water all around us. No more noises. No hitting anything, but we're still rocking. Frowning, I climb the steps up to the door and look out the back.
Something walks across the transom.
Every last bit of air gets sucked out of my chest. OMG. One of the cats got out and is locked outside! I glance over my shoulder. Three cats on the table watching me with huge, we're-freaked-out eyes. Erie's asleep in her basket in the aft cabin. Okay. Not one of MY cats...I glanced back out.
Something ELSE walked across the transom.
"There's something on the boat!" I hollared.
The DH pokes his head up to look at me.
SPLASH
That's when it hit me. Otters. The stupid otters were chasing one another between the hulls of the boat, bouncing from one hull to the next - which made us rock, then they'd shoot out the back, up the swim step across the transom and back into the water.
Apparently, the sight of me in my jammies was enough to convince them that playtime was over. They took off and didn't return. Once the initial burst of terror receded, the whole experience was pretty cool and we regretted not getting to watch them playing chase across our boat. On the other hand, we didn't particularly want otters on board - especially since we sleep with the forward hatch open and we could envision an otter falling through - into the boat. No way that would have ended well...No matter how cute the little buggers are, they're only cute from a distance. Really.
Petroglyphs? Never saw 'em. Walked all over that island it felt like. Never found the petroglyphs. Let this be a lesson: Don't leave the directions aboard the boat when you row ashore.
Posted by Marcella Burnard at 3:10 PM 7 comments:

This blog post is the result of a conversation Jeffe Kennedy and I had while she was in the midst of contest judging. As we compared notes, we realized we were seeing the same issues time and time again. So here's *my* version of How to Up Your Contest Scores in Three (not so) Easy Steps!

1. Cut to the chase - All of that lovely set up you've done showing us how your heroine's life sucks, yet what a wonderful gal she is? Yeah. Cut it. All of it. Drop us directly into the moment of crisis - the moment when everything goes to hell in a handbasket. Here's where my advice will differ from Jeffe's because I'm very much into the whole action/adventure thing. Your opening line should be the moment that your character's life is changed forever - he or she doesn't have to realize that's what's happening - but your reader should. Line one of my first book, Enemy Within: "Sun glinting off the barrel of a gun stopped Captain Ari Idylle dead in her tracks."

The first line from Jeffe's novella, Feeding the Vampire: "“I’ll do it,” I said."

Neither of those openings gives you a whole bunch of information, but both openings tell you that each heroine is about to have a day unlike any that's come before - even if neither of us tell you a single thing about the days that came before. Some of our other works give you a sentence or two of normal life before everything comes crashing down, but if you hear yourself saying "But you need to know this in order to understand..." No. Really. We don't. You need to know that in order to motivate your characters so they can stay true to themselves even while circumstances force them to change. Your readers only need tidbits of backstory sprinkled into the text AFTER the inciting incident (the alien abduction, the zombie attact, the hot guy in the beat up car dented her new BMW, whatever).

If you're receiving feedback like: Backstory dump, or Story starts in wrong place - this is where you want to start. Dump us straight into the action of your story along with your character and we won't be able to help but get yanked in along with him or her.

2. Internal conflict, external conflict. Know the difference and understand that romance requires only internal conflict. External conflict is icing. If you are writing a romance novel, your characters must be a danger to one another on an emotional level - this is internal conflict. It can be as simple as he's a cop and she saw the hell her mother went through every day because she loved a man whose work put him in the line of fire - then he died in the line of duty and the heroine swore she'd never do that to herself. In order for that romance to work, he has to convince her to accept risk and love and potential loss as a part of life. That's internal conflict. The drug war involving local street gangs is external conflict. In a romance novel, external conflict should, ideally, heighten the internal conflict in some way (either forces the hero or heroine to accept the need to change, shows up the vast differences in belief structures, etc) I like knowing why my hero and heroine are a danger to one another. So I ask that specifically when I'm first planning out a story. How is this guy a risk to her? How is she a risk to him? In one of my stories that's still in the planning stages, the hero has to drain the heroine's lifeforce in order to gain his freedom. He's a risk to her not just because he has to kill her, but because he has access to her every memory and there are some memories she's not willing to live with. She's a risk to him because she has the skill and knowledge to destroy him. They each have the other's lives in their hands. Did I mention they're sharing a body? Yes. This *is* intended to be a romance. So how are they going to work all of that out? There. You now understand internal conflict. So many obstacles, yet somehow, these two have to unbend enough to work together and maybe even fall in love. The external conflict - a bad guy kidnapping and hurting kids - works to force these two characters to face their fears, resentments, and prejudices. It is the external conflict that, finally, forces them to either break down the walls between them or they both die.

So. To be clear. Romance requires ONLY internal conflict. Without internal conflict, you don't actually have a romance story. This is fine, if you aren't writing romance. But if you want to sell a story as a romance, you can't pretend a few sex scenes between waves of rabid zombies attacking equals a romance. It doesn't. Your hero and heroine have to have a reason they cannot possibly love one another. Then they have to proceed to get past that (or not - if you like tragedies). Use your external conflict to force them to get past their 'you are the last person on earth' protests.

As a note: I'd once been told that in a romance, you should resolve your external conflict (kill the bad guy) first, and resolve the romantic conflict last. I've since seen some authors changing that up a bit. So take that bit of advice with a block of salt. If you're seeing feedback about 'where's the romance' or 'all external, no internal conflict', start here.

3. Put it in dialog. As much as possible, get out of a character's head and get him or her talking. If they think it, why can't they say it? If a hero says what he's thinking about heroine, you give your heroine a chance to respond verbally. That interchange will tell your readers far more about those two people than entire paragraphs of what they're thinking. Instead of Sam looking at Rene and thinking, "Whoa, she's cute!" Let him eye her, sidle up next to her, wondering what it was she was carrying over her shoulder and say, "What's a gorgeous gal like you doing in a post-apocalyptic dump like this?" Rene awards Sam a hard stare and drops the limp body of a dead man at his feet. Sam blinks down at the dead guy's wide open eyes. "Ditching the body of the last smart ass who tried to sweet talk me," Rene retorted.

Because humans are social animals, we're infinitely more fascinated by two people talking than we are by anyone thinking. Get the thoughts into dialog *especially* if they're remotely embarrassing or compromising! That's where the fun is. Let your characters out to play. You can always pull them back later.

If you're seeing feedback about 'too much exposition' or 'why are they thinking all this' start here.
Posted by Marcella Burnard at 6:18 PM 5 comments: