You've noticed we're behind in posting. We really aren't still in the San Juan Islands. No, we cleared into Canada some time ago and have been cruising, taking photos and problem solving since. We're at a pause for the next week while I go to New York to attend the RWA National Conference. Keith and the cats are in Victoria, BC docked right in front of the Empress Hotel. They'll hold there until I get back.

The problem solving involved felines. Hatshepsut came down with a urinary tract infection. We found a fabulous vet clinic in Nanaimo - the Clinic for Cats - a short cab ride from the marina. They diagnosed her and gave us Clavamox pills. Woo hoo, done deal right? We sail away from Nanaimo, anchor at a marine park. Hatshepsut promptly has a reaction to her meds. She was miserable and we were in the middle of no where. We pulled up anchor and hurried into port. We were too far south at this point to return to Nanaimo. We called the Clinic for Cats, explained what was happening and told them where we were (Sydney, BC). They said, "Give us five minutes, we'll call you right back." They did. They'd found a hospital near us, sent all the records, told them to expect us, called us back and told us the hospital was waiting for us - they'd give Hatshepsut a shot and all would be well. Sure enough. The Sydney Animal Hospital gave Hatshepsut a long acting antibiotic shot called Convenia. No more need for the Clavamox that had been making her feel so horrible.

Okay. Everything's fine, now, right? We haul the girl back to the boat, sit down, and notice that Cuillean isn't acting right. Uh oh. From watching her, I figured she had an impacted anal gland. This means another vet visit. Those things will rupture and you don't want that. Except that it wasn't. I'd gotten it wrong. I knew this when I saw the blood on my cat. She had an abscess and had pulled the scab off. She was bleeding. All over the boat. It wasn't dangerous, and once she'd opened the abscess, she felt much better, but it still required a trip to the clinic. So first thing Saturday morning, we were back in a cab headed to the Sydney Animal Hospital with another cat. Cuillean was dehydrated, needed a bit of minor surgery to finish draining the wound, and she needed antibiotics. They took very good care of her and we had her back aboard that afternoon. She's healing well, now, and we're hoping that's the end of the feline veterinary adventures.

We do have more photos to post and stories to tell about river otters using the boat as a jungle gym in the middle of the night. We'll get those posted. Eventually. I swear.
Posted by Marcella Burnard at 4:24 PM 5 comments:

The resort of Roche Harbor. This is the family home and remaining company town from the largest limestone quarry west of the Mississippi. The hotel was built by John McMillan, the quarry owner. It housed customers and other guests (including presidents and actors). The main pier is from the original quarry structure.

The new docks. The service at Roche Harbor is the greatest. We called for a slip assignment and staff met us at the dock to help catch a line, give us directions to everything and to offer to send over the pumpout boat.

Looking to shore, the little houses in the back are what remain of the company houses built for families (they're now restored accommodations for the resort) - the single men lived in barracks.

This was originally McMillan's residence. It's now a restaurant where the food and drinks were really super. Crab bisque. Mmmmmm.

McMillian had a church built. It was bought and converted into a Catholic chapel some years ago. It is still privately owned.

One of the remaining lime kilns. The resort has done a great job of preserving the remains of the quarry and of putting up signs explaining the history and the process behind the limestone business. 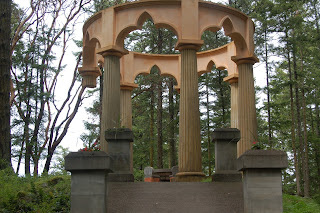 This is the McMillan family mausoleum. In the center is a huge stone table with stone chairs all around it, one for each family member. Their names and dates are etched into the backs of the chairs and their ashes are interred in the seats. This was a great stop full of lovely hikes and full of all kinds of history. On the way to this site, you pass by a sculpture park. It's a huge field with sculptures scattered around the landscape for you to discover and to stumble upon. It was the best art museum I've ever been to and was the icing on the historical cake made up of Roche Harbor.
Posted by Marcella Burnard at 10:25 PM 1 comment:

Reid Harbor from shore, looking out of the harbor. That's the park pumpout dock there in the foreground.

The dinghy dock from shore. This shoreline is steep, very much like the shore you see on the opposite side. It was quite a hike getting to the county road that would take us out to the lighthouse. 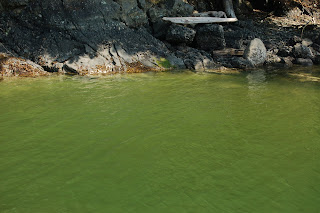 Look at the color of that water. It was gorgeous. 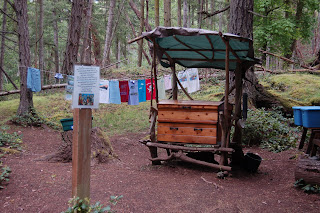 A family on the island runs a trading company. They have two 'out' stations on the island like this. Both provide water for hiking tourists. This one is right beside the island school house - lovely construct. Couldn't get photos, though. School was in session and we didn't want to distract the students. The trading post offers tee shirts, hats, sweatshirts and children's items. Payment is on the honor system. Take your item and mail payment in the envelope they've enclosed. 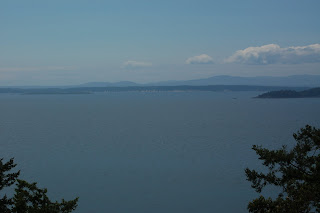 Haro Straight and the end of our hike. We found this overlook, sat down, had lunch and kept our eyes out for orca feeding in the straight. That is Canada off in the distance. Beautiful stretch of water. Beautiful day. No whales. 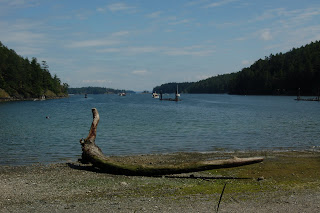 Reverse hike. We're at the lowest point of our hike back. We still have to scale the steep granite ledge on the left hand side of the photo in order to get back to our boat. Didn't bother counting calories this day.
Posted by Marcella Burnard at 10:04 PM 3 comments: