Here's the first load of five months worth of gear. Not bad, right? We should be able to put this all away. But stop and think for a moment. How do you pack for five months away? Sure, you'll have access to grocery stores. Do you have medications? Special products you prefer? Do you know you'd be able to find whatever brand of widget you count on when you leave your familiar foraging grounds? What about the rest of your family? You already know my pain regarding the catfood. We worked it out. I found a way to make Hatshepsut's raw in manageable batches (a theory we've successfully tested) and I've packed in fifteen cases of Wellness for the other cats. All well and good. Because of my allergies to silly things like perfumes, I have to pack five months worth of soap that won't give me hives. Let me explain how you don't want to find out the hard way that you can't count of 'unscented' to actually mean 'no perfumes'. Allow me to also point out that there are just someplaces no one should ever have hives. Read the label of your unscented soap. Odds are high there's a 'masking scent' unless you shop the same place I do --- did. Naturally, the soap thing is only a tiny example of the things you take for granted simply because you can. Okay. Here's the picture of the LAST load:

Yeah. It was unbelievable, but we got it stowed and the cat tents built. (Kids and their fortresses, I swear.) The load is even mostly balanced. One of the challenges of a catamaran is weight distribution. You want the hulls reasonably on level. It's also a good idea to not overload the boat. While we doubt we're over the safe weight limit for this boat, we do know we won't be going anywhere fast initially. Our plan to cast of Wednesday failed when we realized how many things we'd forgotten in our haste to pack. That and the weather really, really sucked. That's the politest way I can possibly describe that. We fetched our remaining crap, finished last minute errands and had dinner at Moshi Moshi in Ballard. Thursday, I drove the car over to drop at my parents'. We didn't want the car sitting unattended for five months in the marina parking lot. Keith went to see a movie. The weather wasn't much better. KING 5 reported a funnel cloud in Skagit Valley. It was stupidly cold. Hello? Ma Nature? April? At any rate, I'd been told somewhere that sailors couldn't begin a journey on a Friday. Here are the reasons why - with all the bad luck available to sailors, maybe I *should* double that life insurance...The story about the British Navy trying to dispel the superstition by building a ship named HMS Friday? Urban legend, but a fun one.  So here we are. Saturday. I swear. We cast off Saturday. First port: Poulsbo for the release of Enemy Games!
Posted by Marcella Burnard at 9:57 PM 6 comments:

Enemy Games is out in stores on May 3rd. One of the perks of having written the book is that I get a box of books a week or so before the actual release date. This is so I can read through the book before it releases and obsess over all of the typos, repeated words and other assorted mistakes we either failed to catch or that otherwise slipped through the cracks in the final editting phases. Yes. That sound you hear is me, pounding my head against the desk. The errors so far are relatively minor, but I am SO annoyed I missed them. I guess it's true. You can only read through a manuscript so many times before you simply stop seeing what's actually on the page. Arg.

On another note, though, I love this cover. I'd spent some time on the internet surfing for images of abandoned, run down industrial-looking sites. There are some amazing photographs of that sort of thing out there in the world. I forwarded a few to Berkley's art department. They were photos that I thought captured the feel, if not the exact impression, of the space station in the story. The cover artist really did a nice job of capturing that run-down, held together with bailing twine and a prayer look I'd wanted to convey - even if there really aren't windows in space.

I picked up the box of books from the post office, opened it, admired the book, then ran for the car. It wasn't until much later that evening that DH and I really took a good look. Did you catch it? The print beneath my name on the front cover? I hadn't. When I did, I had to do a double take. Here it is, blown up. 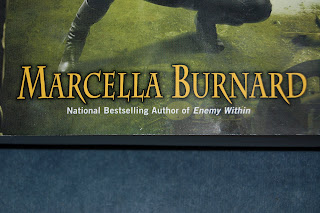 Yes. That says 'National Bestselling Author of Enemy Within'. I stared at it for a full minute, at least, because this was news to me. The first book had hit a list? When? Where? Still uncertain, I emailed my agent. She called the editor and then rang me. Apparently, at some point unknown to me, Enemy Within DID hit a best seller list with one of the national bookstore chains. (We're trying to find out which one - more for curiosity's sake than anything else.) It's funny. It feels a little like cheating, when most of us think of the New York Times list or the USA Today list, but since neither of those lists is an actual report of books selling the most copies, maybe the bookstore list, which is a direct reflection of sales, is equally valid. Either way. I'm tickled. And heck. Maybe it's a start?﻿
Posted by Marcella Burnard at 10:10 PM 11 comments:

The boat heater is in and it does an adequate job. The interior of the boat is sparkling clean. The exterior - well - after some drama, a few small, third degree chemical burns and a new pressure washer, the outside of the boat was clean for a brief moment in time. Seagulls target clean boats. It's like a video game to them, I think. But several projects yet remain.

The canvas enclosure is green. It should be white. Once we've been through another round of Better Living Through Chemistry, it will be white and put back up. Then we need a radar reflector. The Inside Passage supports some commercial traffic, not the least of which is the ferry that runs from Bellingham, WA to Whittier, AK. Those larger boats rely on radar to show them what's out there on the water. Fiberglass hulls don't do a very good job of reflecting radar back. Thus, a metal reflector hung in the rigging so the big guys have a shot at seeing us little guys.  The cats have ripped the fabric covered headboard in the master cabin to untidy shreds. I'll recover that with something less attractive to kitty claws. We hope.  Every trip out to the boat now, entails carting a load of stuff down the dock to stow aboard for the voyage. Fifteen cases of catfood. Dishes. Silverware. Pots, pans, clothes, towels...everything we'll need to function as a household. We don't have an exact target date for actually getting out of Dodge, but the week of  April 25th is starting to look promising. Point of fact: we have to be gone by May 1 when our subleasees take possession of the slip.
We keep hoping that Mother Nature will get the memo about spring between now and the time we shove off.
Posted by Marcella Burnard at 4:30 PM 6 comments: