Funny Thing Happened Since Last I Was Here 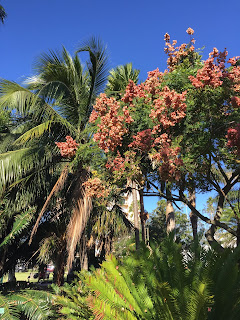 So I live in Florida, now. That two year gap in blogs - that was me working on keeping some people and pets alive. Succeeded with the people. Ultimately lost the battle with the pet as you do when they're as old as he was. (The youngest two are now 15 and they're fine. Ish.)

The move from Washington State to the west (Gulf) coast of Florida was a massive undertaking because it wasn't just my nuclear family, I managed to convince my parents to move with us. Do you know how much stuff you manage to accumulate when you own 5 acres of land, a house, a boat, a tractor - for realz a tractor (and a bull dozer)? Trying to sort through a lifetime of my parents' stuff in a compressed time frame so they could sell the house was intense. But we did it and here we all are. My husbands' parents, his sister and her kids had been in this area for years. This moves a portion of my side of the family into the region. The only ones missing are my sister and her daughter.

That move diagonally across the continent wasn't just a matter of mileage. Culturally, I swear to you I need a mentor to comprehend Florida. While for the most part, we all speak the same language and have base cultural experience in common, the day to day details are totally different. Tiny example - in WA when I go for the annual physical, it's everything - breast exam, pelvic, blood work - everything in one single appointment. Not in Florida. PAP smear and breast exams are a separate appointment. No big deal. It's an expectation reset. One in a long line of expectation resets I've had to navigate since moving. It's good for my brain. I get that. But apparently my brain is a three year old who hasn't had her nap, because once in a while, she plops down on her butt in the middle of whatever I'm trying to cope with, crosses her chubby little arms and refuses to budge.

Banging my forehead against the wall hasn't helped. So I really think there ought to be a mentorship program available. I don't know - maybe through the department of licensing you know? To encourage you to update the plates on your car. Go in, swap your plates, get assigned a cheerful volunteer you can text with things like "Best steak in town in a restaurant that isn't a tourist trap - go!" or "This snake just latched onto my shoe, here's a photo, how loud, exactly should my screams be?"

One of the things I absolutely give Florida props for: you can make an appointment to get your drivers license or your car license plates. An appointment. WA state didn't do that. You took half a day off work, went in, stood in line, and took your chances. Oh. And sunshine. My goodness, the sunshine.

Posted by Marcella Burnard at 8:46 AM 4 comments: